I spent the weekend quite fruitfully… signed up two workshops – one in the morning on pastry making and another one on peranakan cooking in the afternoon. Randy thought I had gone mad over culinary…and Tracey thought I was mad too…Anyway I went ahead coz I wanted to learn something useful.

First workshop – Pastry making, we made 4 different types of tarts, we started off with blueberry cheese tarts, chocolate tarts, fruit tarts and then Taiwanese Portuguese tarts. The most difficult one was the pastry for the Taiwanese Portuguese tarts. Got to use oil and water dough and lots of folding to get the crispy texture. However it was fun and all the four tarts were so yummy!!

Wonderful tarts created by the "Masters of Tarts" 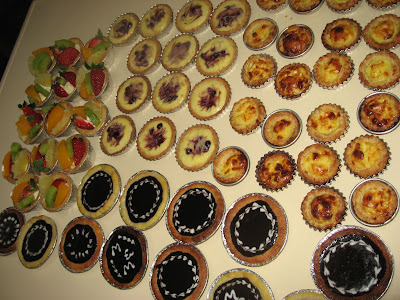 Brought some over to my nephews and nieces. They all love them and my dearest little darling requested that I made the Taiwanese Portuguese tarts for him to bring to church on the next day.

Here they are…woke up early.. went for my early morning exercise at around 5.30am and then started to make these tarts at around 6.45am. The beam and smile received by the little kids when they sent these little tarts into their mouths already won my heart… 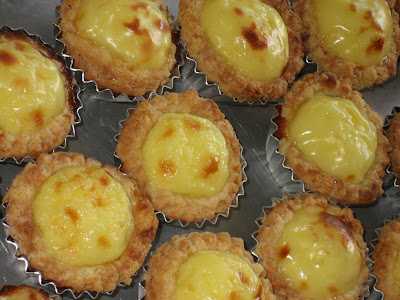 Second workshop was on Peranakan cooking. Learn four different dishes – Ayam Masak Merah, Durian Pengat, Terong Sambal (Brinjal in Spicy Sauce) and Stuffed Sotong Soup. It was quite an eye opening class for me. Though I am a true blue peranakan, I have never tasted stuffed sotong soup before.

Out of the four dishes, I preferred durian pengat and the Terong Sambal. They are rather nice. To me, stuffed sotong soup is quite the same as chicken soup except that you get the fragrant of sotong (but I am not a very big fan of seafood). Ayam Masak Merah – the gravy is a little too sour.. perhaps a little sugar would make the dish just perfect.

Here is the teacher stuffing meat into the sotong case. 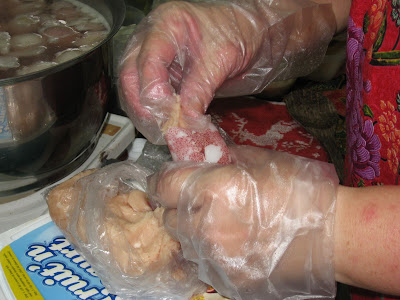 Terong Sambal in the wok 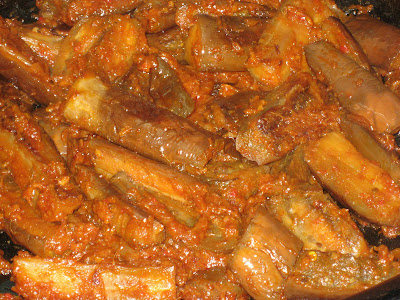 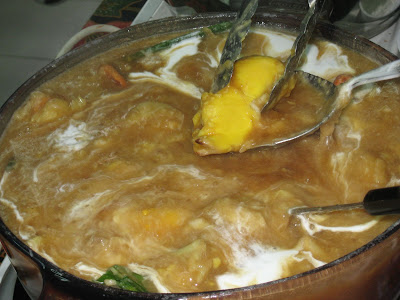 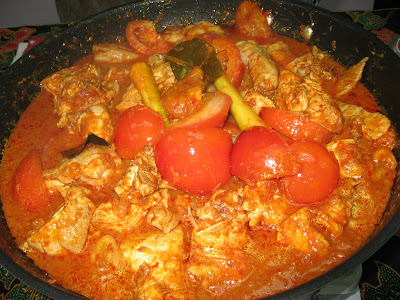 Well I am counting down (till Saturday).. Have decided to drive to Malacca this long weekend with my two good friends, Randy and Tracy. Have booked ourselves in a boutique hotel... well not Hotel Puri but The Baba House. Well I intend to try the four dishes cooked by the professional chefs in the nonya restaurants in Malacca.
Posted by Olivia at 9:37 PM

Hi Olivia, love to read yr blog. Yr bakes look so gd. Saw you always attend baking classes, can you pls share where you had the classes and the cost? Thks so much.
katherine_ly@yahoo.com.sg

Hi Olivia,
Like all the blog that you have post.knowing you always attend baking classes,I oso like to attendting all kind of cooking & baking classes.care to share the recipe?BTw where did you attend classes oftenly? can let mi know where you had the classes, location and the cost? Thanks so much.
heok_chia@yahoo.com.sg